When in Davao City: Our Favorite Transient House in Buhangin 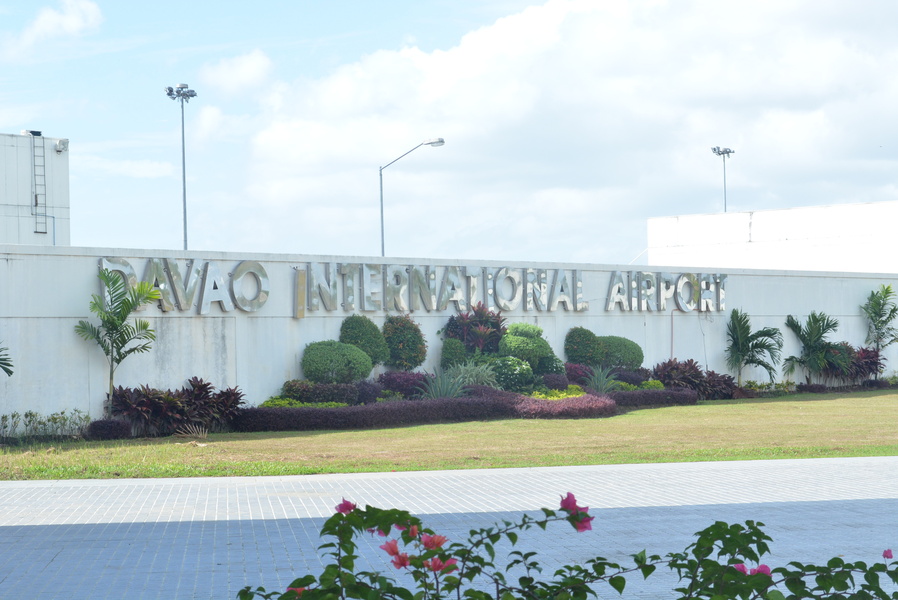 Accommodations always take up a huge chunk of the budget during travel. Hotels are always the best way to go, of course, but only if you want the ultimate luxury (not the way to go when you are a proclaimed backpacker) and you have the moolah for it. Otherwise, you have to make do with what your budget could afford you: pension houses (like the one we stayed at in Puerto Princesa City, Palawan), dormitels, relatives, couchsurfing hosts and – something we just discovered but probably has been around for some time now – transient houses.

Transient, according to Merriam-Webster, is an adjective which means not lasting long or staying somewhere only for a short time. As such, transient houses are designed for such arrangements where you may intend to stay (or not) in a place for a short time – maybe a few days, a few weeks and perhaps even a few months.

The crazy thing about our recent Davao City trip was that we made no reservations on any hotel whatsoever. I even posted a status on my personal FB page because, while we had been successful at finding a place, not making reservations beforehand – especially with an infant – is definitely not for the faint hearted. The original plan had been to couchsurf but apparently, finding a host for two adults and an infant is a pretty difficult task in the Philippines. I inquired a hotel but never made reservations. On the day of the trip, all I secretly did was hope that there was some place to stay, fan or aircon, that we can spend the night at. All this in time for Davao’s Araw ng Dabaw. It’s like hoping pigs may fly somehow.

So, we arrived at the Davao International Airport at around 9AM on Sunday morning, March 16. The airport policemen suggested that we take the airport shuttle to get to the highway which was actually just an easy five-minute walk, even if you are lugging around an almost 10-kilo backpack (maybe just five for me) and a 10-kilo 1-year-old baby. We got in the shuttle anyway and that was where we met our angel in disguise. 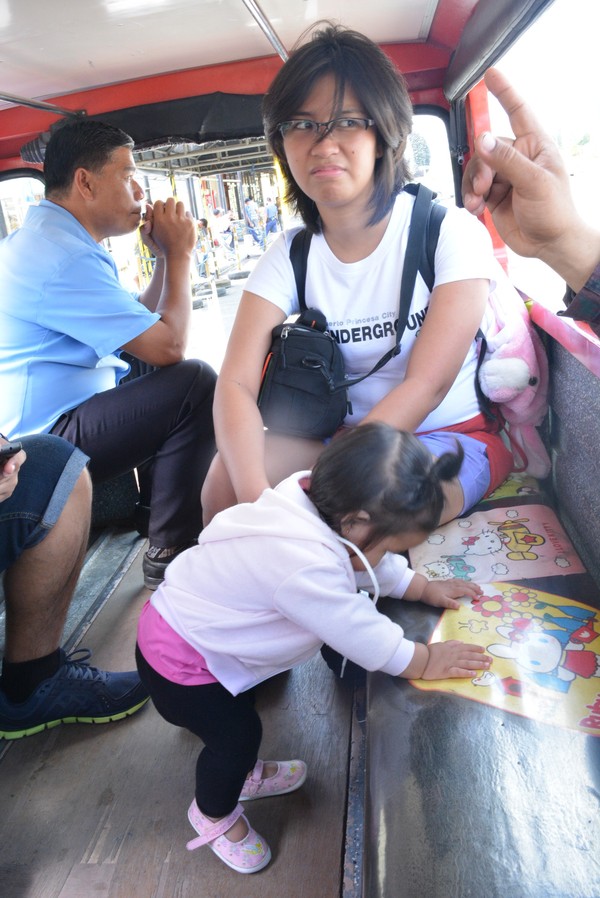 I forgot how we got to the part of the conversation where he suggested a place to stay but we did anyway. I guess it was when we asked directions to get to MyHotel or something. He suggested the place where he was staying and that was where we hit it off.

We paid the shuttle 50PHP (~1USD) for all three of us to get to the highway, which much to our dismay was just a very short ride. It was a little hard to hail a multicab from the highway with our route as there were now three of us adults and all vehicles were full. So, we hopped into a taxi. It cost probably around 80PHP (~2USD) from the highway to get to the transient house. So much for trying to do budget traveling.

The ride was probably about ten minutes, I couldn’t be sure. But there, at the corner of Pag-asa and San Gabriel streets (not exactly), in Buhangin, Davao City was a great accommodation for us. It was like a boarding house of sorts – we looked through their fan and aircon double rooms. Nanay (whose name I forgot) was very accommodating to us.

We secured the place and took a fan double room for 350PHP (~8USD) a night. We weren’t staying there that night though, only the next day, but just in case we took it anyway. That’s 700PHP (~16USD) down our travel budget. On our actual night of stay there, we added 150PHP (~3.4USD) to allow for airconditioning for the baby. 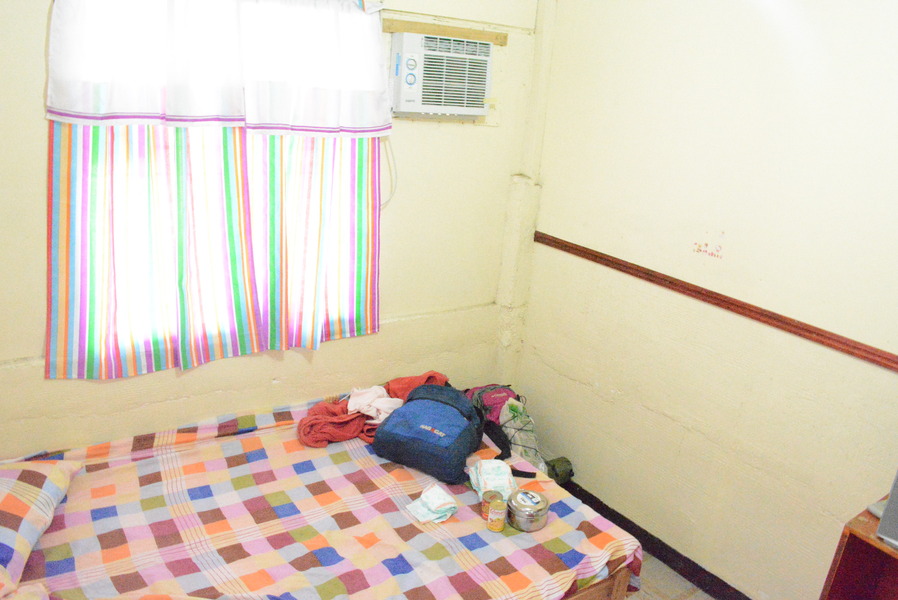 putting one of our packs, ready to take the place

As we were trying to be the budget backpackers that we were, we brought our own food complete with a portable stove (we bought Butane gas afterwards that day). The great thing about the transient house is that it allowed for cooking – it’s sort of like owning the place for a day. We even had a sink with plates, drinking glasses, forks and spoons, pans and a small dining table. There was also a bathroom which we could have shared with another boarder had someone stayed at the single room beside ours. It was a very private affair. Plus, our room had a TV and was convertible to an aircon room. 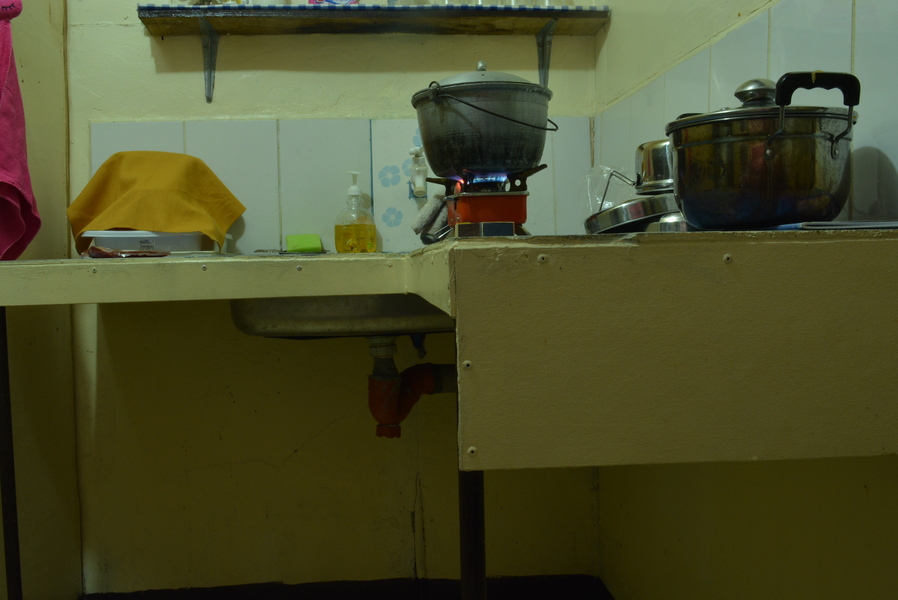 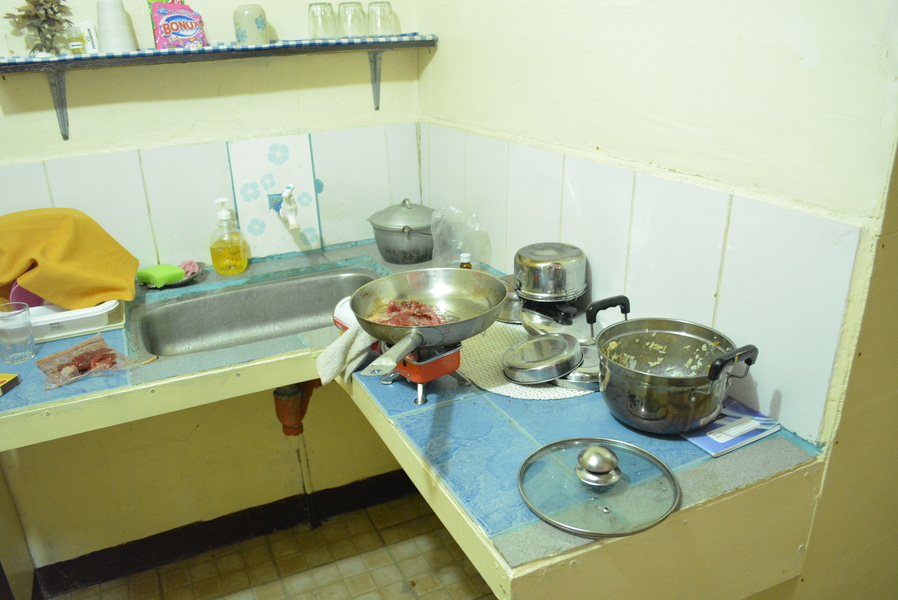 the sink at another angle 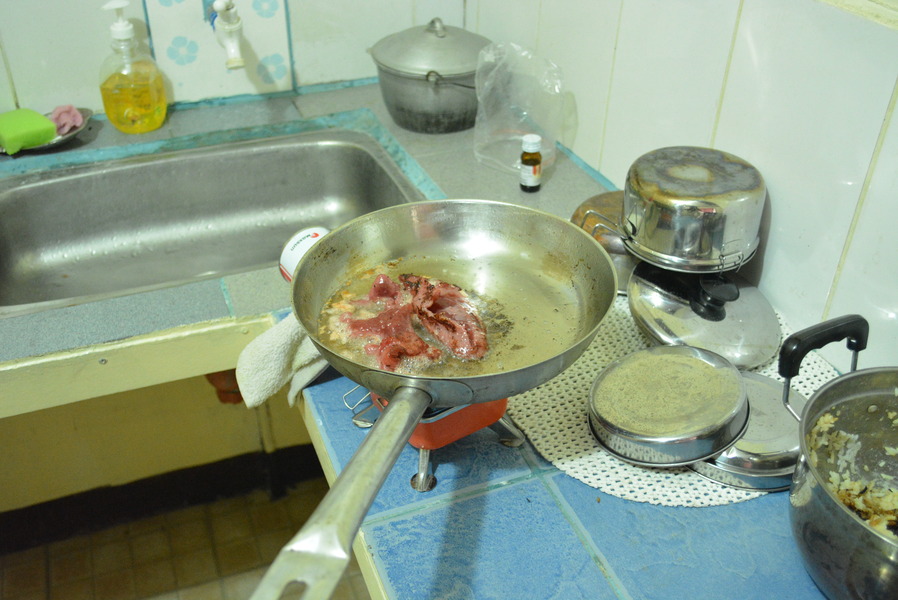 plus we cooked our own food (they sell frozen products, too) on our 3rd day in Davao 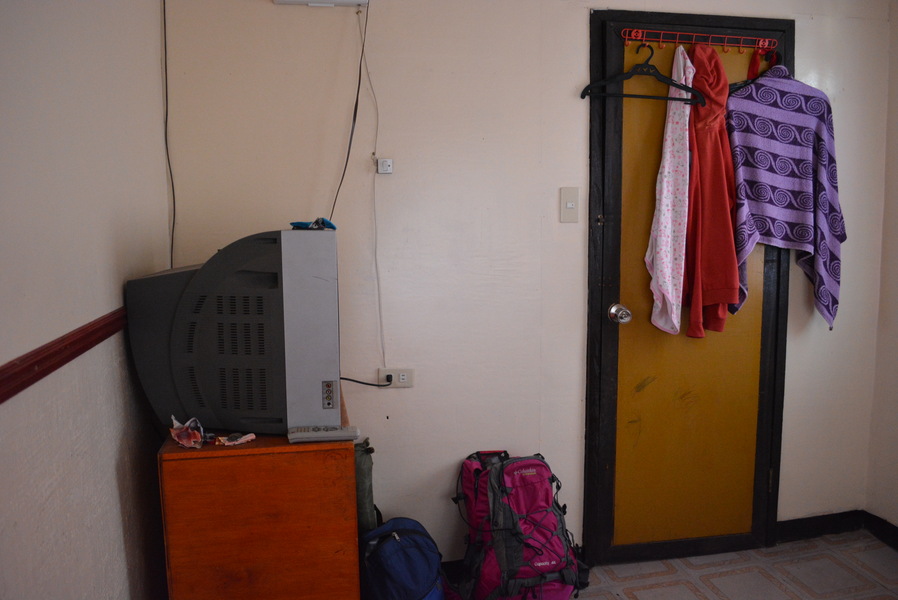 the door from inside the room

We thank Rommel for finding us a place to stay the second night of our Davao City sojourn. He was actually working at some call center based in Manila although they are hiring from Cebu, too, and well, I forgot most of his story. Sorry. We never got his number though. Anyway, he said he just scoured AyosDito.ph (no advertising here) for transient houses and voila! – it was there. Haha.

The TV we had in the room was unfortunately not at its best shape as it kept muting out every once in a while. Their WIFI signal is very weak, too. Not a problem for us though – we weren’t in Davao to enjoy these perks after all. 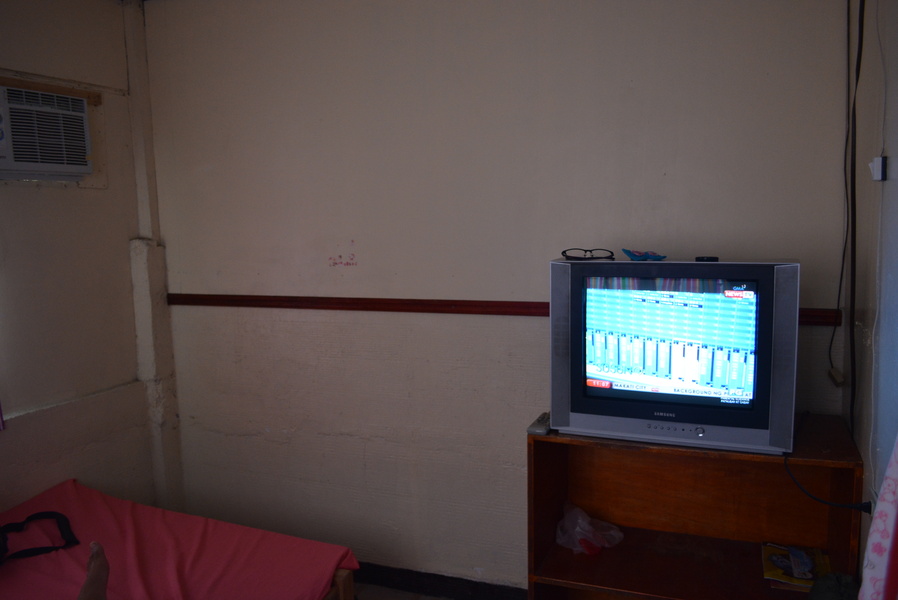 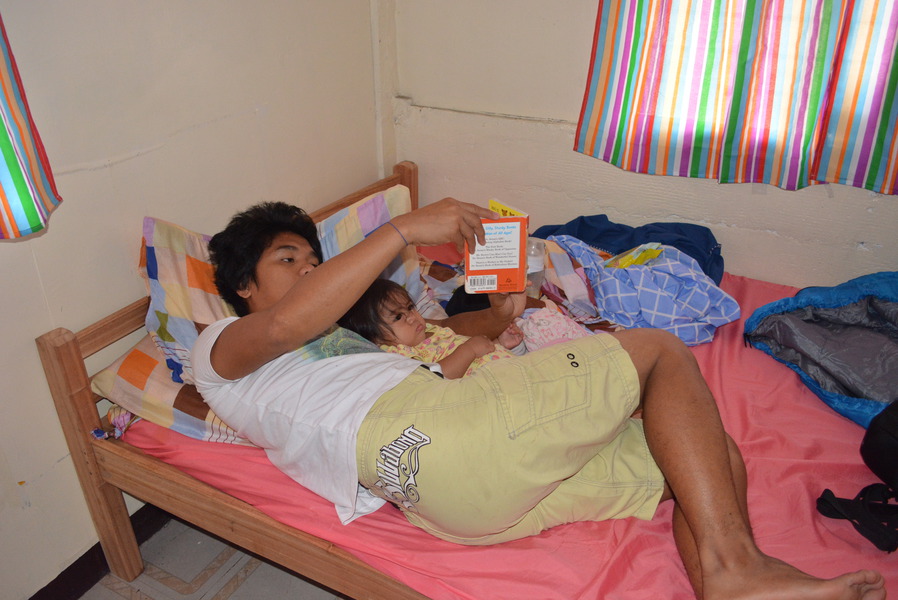 chillin’ on our 3rd day in Davao

Oh yeah, I searched for the place, too. Here are their listings in AyosDito.ph and Sulit.com.ph. You can contact Ate Maritess, Nanay’s daughter, they are all very accommodating and friendly people who will definitely not give you a hard time in Davao.