The Philippines can be such an intimidating place to travel with kids but fear not – we’re here to prove you wrong. In fact, we just recently brought our toddler up day trekking at Mt. Pinatubo, Zambales. This is our third mountain, according to blog timeline, so far.

Right after taking a well-deserved shower at the public bath in Lucap Wharf in Alaminos City, Pangasinan, we immediately set off on a hike to the bus terminal. Lucap Wharf is just a mere 5-km distance to the bus terminal but it took us about an hour or so to close it. From Alaminos City, we took a 5-hour-ish bus trip to Capas, Tarlac that costed us 223PHP (~5USD) per person.

Although we love to DIY our travels, we unfortunately could not because of the expenses. Renting a 4×4 to Mt. Pinatubo costs around 3000PHP (~67USD) and can carry about 4-5 passengers. Definitely waaaay beyond our budget for this 2-person trip.

Thankfully, my research skills paid off when I found Majestic Mount Pinatubo Tour and Homestay. What they do is gather people and form them into groups so that expenses are subdivided. Thus, our tour costed us only 2050PHP (~46USD) or 4100PHP plus a 174.90PHP paypal fee (~95USD total). You can stay away from these additional fees by sending money through over-the-counter, bank-to-bank or through Cebuana/LBC.

We were very glad that Ms. Sonia Bognot and her father were very gracious hosts to us even if we arrived at around 9pm after a 1-hour-ish tricycle ride from Capas Junction to Sta. Juliana that costed us 300PHP (~7USD). We decided to stay at their house that night to make sure we could maximize sleeping time and that we wouldn’t be late for the next day’s activity.

By the way, our homestay costed us 1500PHP (~33USD) but were very happy to see that we had the air-conditioned room all to ourselves. It could probably have fitted about 10 people or so. Plus, it had its own bathroom and also a sink where you can wash stuff and probably even cook if you have a portable stove with you but I’m not too sure if they allow that.

We woke up around 6am the next day, with Ms. Sonia (and her father and daughter) driving us to the meet-up area. There we were assigned a group, a 4×4 and a guide. We were very happy to find out that we were riding an open-back 4×4. It definitely felt very adventurous at that moment. 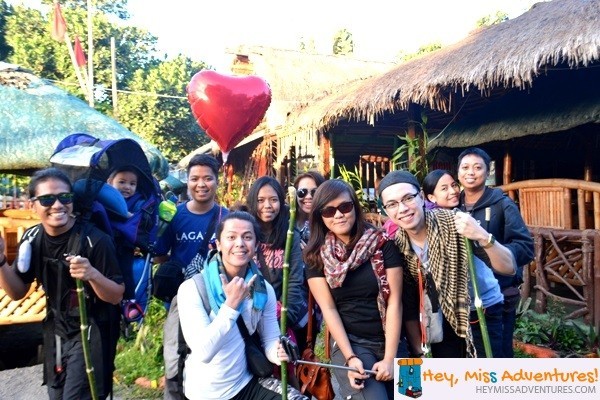 Mt. Pinatubo is about 1,486MASL (according to Wikipedia) which is probably why it still felt chilly at 8AM. I would suggest layering up your clothes and also wearing long sleeves. Despite the cool weather, you are not protected from getting sunburn (or unwanted tan lines). 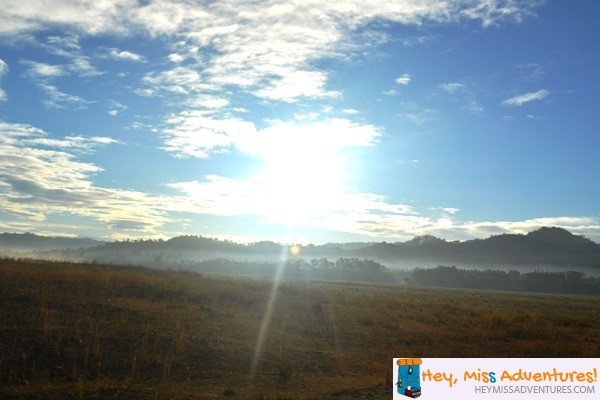 It takes about an hour of bumpy ride in the 4×4 to get from the meet-up point to the jump-off point near the foot of Mt. Pinatubo. I was amazed at how these vehicles could pass by all types of terrain and at all angles, too, with no problem at all. The partner and I are definitely getting a Land Rover or a Land Cruiser one day.

The other thing I love about the Mt. Pinatubo 4×4 ride? It felt like we were transported into some other place beyond Tarlac (the entry point) or Zambales (where most of Mt. Pinatubo is located). I somehow thought we were in an African safari. At some points in the trip, I wondered if some more movement would cause the lahar in the mountainsides to slide down at us below. Mother Nature can be very intimidating at times. 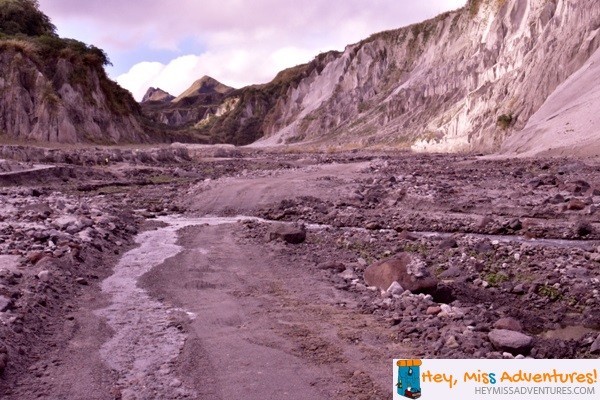 When we arrived at the jump-off area, our guide assisted us with our breakfasts. It was still around 7/8AM. All meals were provided as part of the tour package, by the way.

The next task will probably intimidate you. According to the sign, the duration at which you get to the crate lake will determine which age group you belong. In our defense, there were so many people on the tour that we had to line up along the trail. People were taking selfies every few seconds or so thus slowing us down (or so, we tell ourselves). 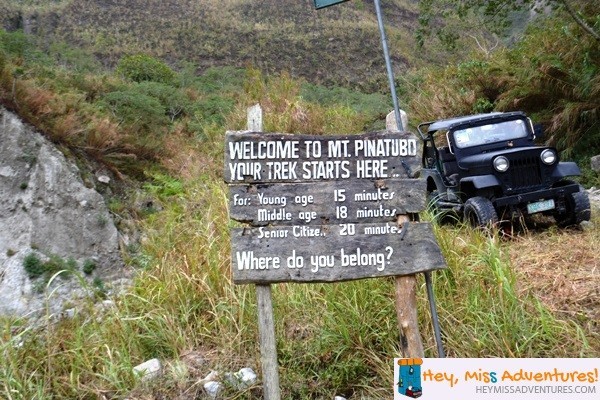 After a few minutes or so, we finally reached the view deck. The majestic view of the crater lake is what greets you. Would you believe that this is the mouth of a volcano that erupted back in 1991? When I was looking for blog posts on Mt. Pinatubo, I found out that it was possible to swim in the lake back then. However, experts continue to monitor the volcano and found out that the sulfur levels have risen in the past few years.

From what I heard, it is possible that Mt. Pinatubo will become an active volcano once again. But that will probably happen in the next 600 years or so. Whew! 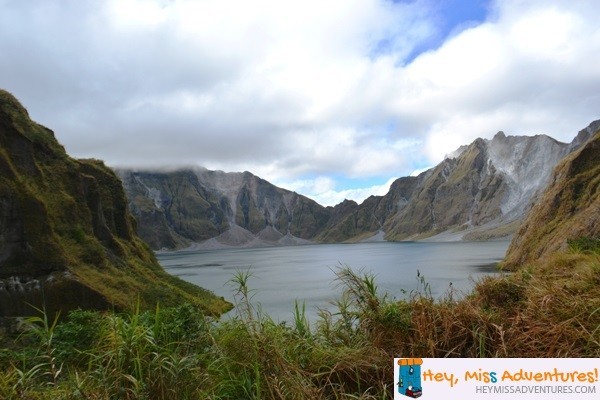 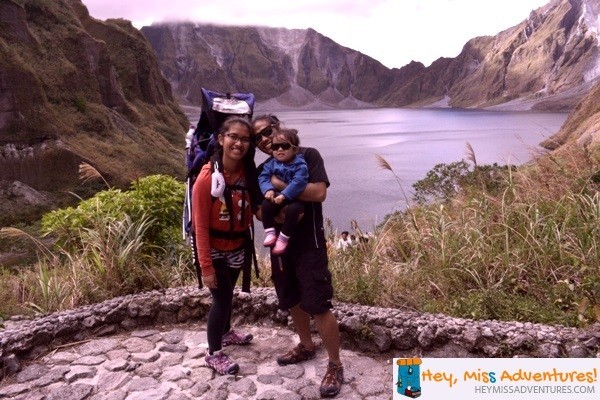 During the tour, we found out that there were two other Cebuanos in the mix. Boy, were we relieved to find out that we did not have to speak Tagalog the whole time. 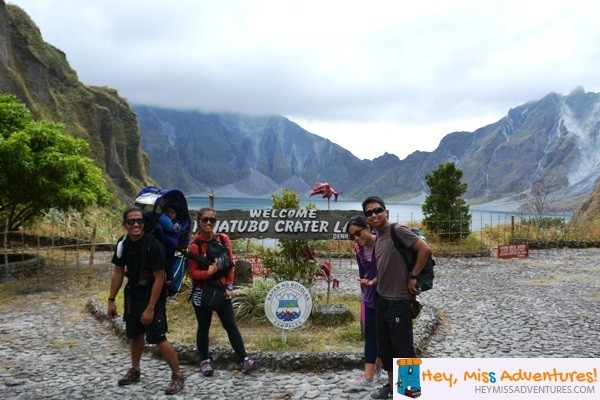 You will have to get down in order to get to the crater lake (and maybe do a little washing using the sulfuric water on your problem skin areas – just don’t bathe in the lake).

We took a rest there for about an hour or so, just taking in the beauty that is the Mt. Pinatubo crater lake. The initial plan had been to camp out there but I heard that there were too many papers to process (perhaps making it pricey as well), we decided to opt out. Later on, we went back to the view deck and ate lunch courtesy of our tour package.

A few minutes after we finally had our fill, we decided to go back to the jump-off point and call it a day. The 4×4 trip may have been fun at the beginning but it definitely wasn’t as much during the trip back. Okay, maybe it was but not later on when you realize you couldn’t take a bath because your backpack is not with you (we left it at Ms. Sonia’s house since she told us she’d just have it dropped to the meet-up point later on).

This is the aftermath of the 4×4 lahar ride. It had gone really dusty that there was almost zero visibility in many areas of the road. Don’t worry, the daughter was sleeping the whole time so we were able to cover her face – just not her hair and other parts of the body. Ooops! 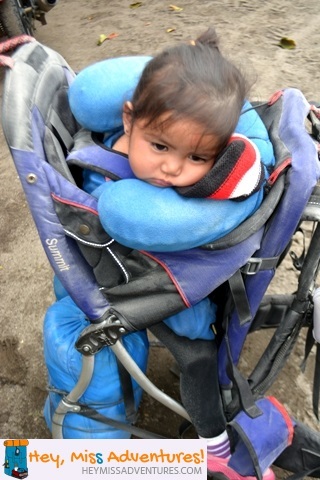 And then…off to Clark we went. And yes, after all those dust, we only got to take a bath when we got to Clark, Pampanga around 1-hour-ish later. Eeeek!

Total Family Expense for Mt. Pinatubo: PHP 6346 (if you get fetched from Manila and then go back to Manila right after the tour, you only spend PHP 2050 per person)

Where we had been: Hundred Islands, Alaminos City, Pampanga

Disclosure: Ms. Sonia and her tour company did not pay us to write this. We were just very happy with the tour (in terms of service and costs) and they were recommended to us from a traveler in Trip Advisor. Yay! 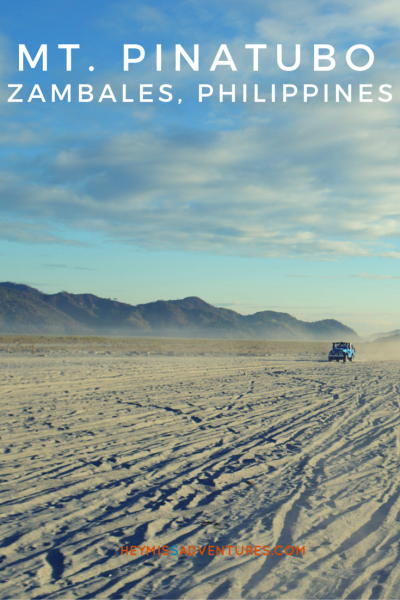